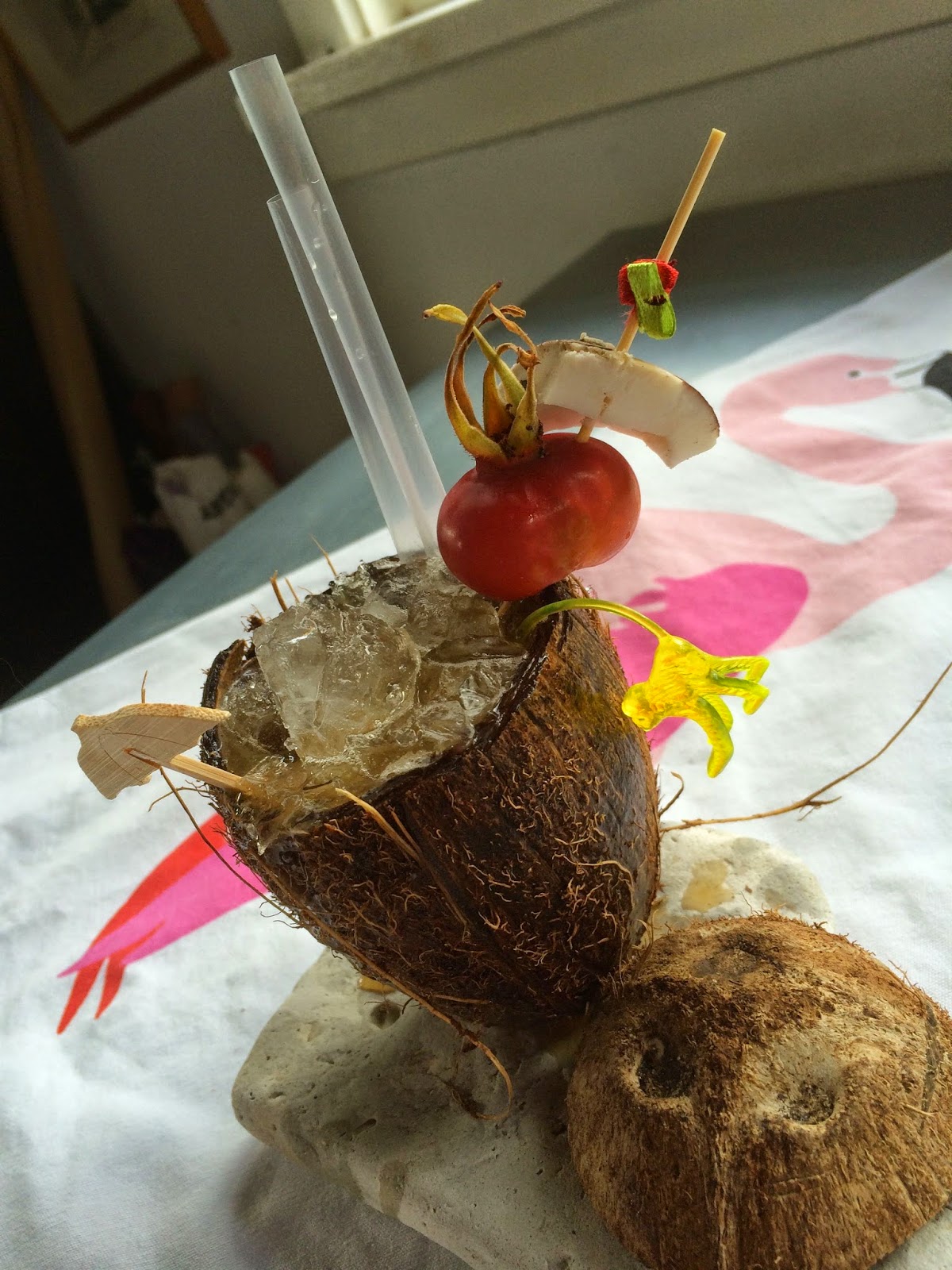 I know better than to name my contribution to this month's MxMo Coco Tai: I want to live a long and full life, shortened by neither the Tiki-Gods nor their followers. So I chose a better name....

I don't remember ever having to work as hard or thinks as long when it comes to a MxMo theme. But ever since JFL of the brilliant blog Rated R Cocktails published the theme of coconut I have been struggling.
His reasons for choosing the theme did not help me at all:


Ah the Coconut, so round, so firm, so fully packed… with flavor… Coconut is versatile, coconut is magical, not only is it edible but it can be made into scores of products. However, this month you need only concern yourself with the liquid variety as I unveil MxMo Coconut. Yes friends, it is my sincere belief the coconut does not get the love, nay the respect it so richly deserves. Because this easy going tropical seed had its heyday in the Tiki era, it’s happily associated with the same fun loving drinks… Despite all the great Tiki drinks coconut appear in most people are down on the humble seed because of the Piña Colada. Friends, this need not be so; I say we take this delicious ingredient and show it can yield a tasty, well balanced cocktail. It doesn’t have to be tropical necessarily. I’d really love to see some of my friends more classically minded come up with a cocktail more befitting a pre-Prohibition mindset.

Because you see - I don't like coconut - as in could live happily ever after, if I never tasted it again.

Consider this: I live in Denmark on the 55th parallel. What ever coconut I've come into contact with have been old, stale and in some instances rancid. Or on most other occasions....fake.

But I'm not one to turn my back on a challenge. So I persevered. I really did think long and hard how coconut could find it's place in a pre-prohibition gin cocktail but I could not come up with an answer.

Instead I kept returning to a trusted friend - the Mai Tai. And I thought what if I replace the orgeat with a coconut syrup made the same way? Switch lime juice with rose hip juice and the curaçao with limoncello?


Shake all ingredients with crushed ice, pour into hollowed out coconut, garnish with a piece of fresh coconut and a rose hip.

Email ThisBlogThis!Share to TwitterShare to FacebookShare to Pinterest
Etiketter: golden rum, limoncello, MxMo, My own mix 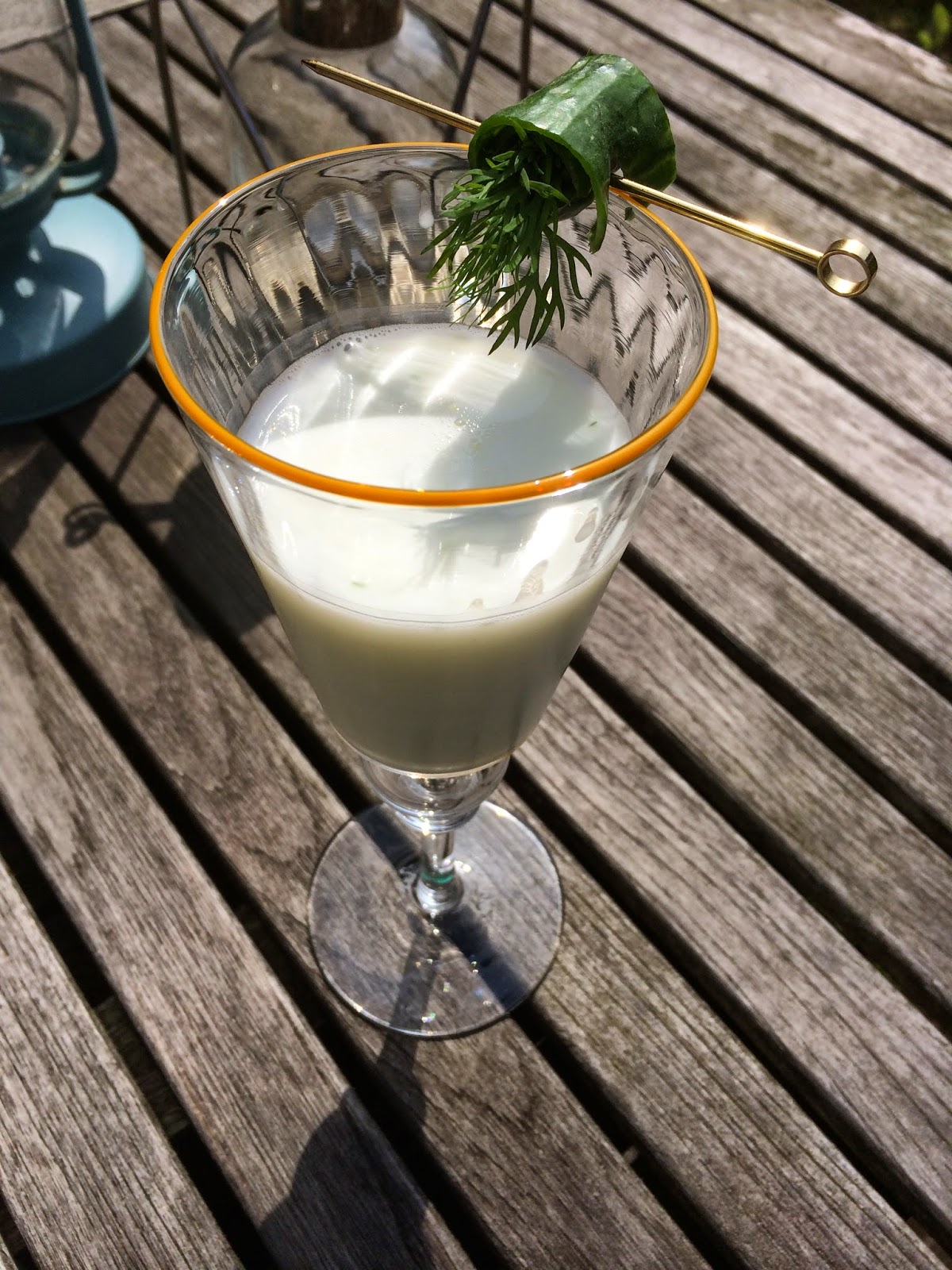 Recently a journalist asked me to explain, what makes a cocktail a classic.

The best comparison I could come up with was literature. A book becomes a classic when it newer leave the curriculum of everyday readers - when it stands the test of time. Same with a cocktail - if people keeps drinking it, it's a classic.

I do not however have any idea over what period of time this is measured - not with books, not with cocktails.

But we do talk about modern or almost instant classics like Audrey Saunder's Old Cuban and Sam Ross' Penicillin - Tom Walker's Maid in Cuba an absinthe/cucumber cocktail in it's own right have been described as a modern classic too.

Perhaps the Flutterby Lassi from the bar of one of London's smartest Indian Restaurants - Gymkhana - will become a classic.

If not I find it fits nicely the other two dairy based cocktails I have mixed this year: The Snowball and the Buttermilk Margarita. The later being much better than the first.

For the Flutterby I followed this recipe from the Guardian pretty close:
Start by cutting the peel of the cucumber - you need it for the garnish so using a peeler cut one long peel around the stump of cucumber.

Muddle the cucumber with 2 sprigs of dill, the lime juice and the gomme - this was where I decided to up the lime juice. Add absinthe and yogurt to shaker and shake well with ice.

Double strain into glass and then roll the last sprig of dill inside the cucumber peel and use that as a garnish.