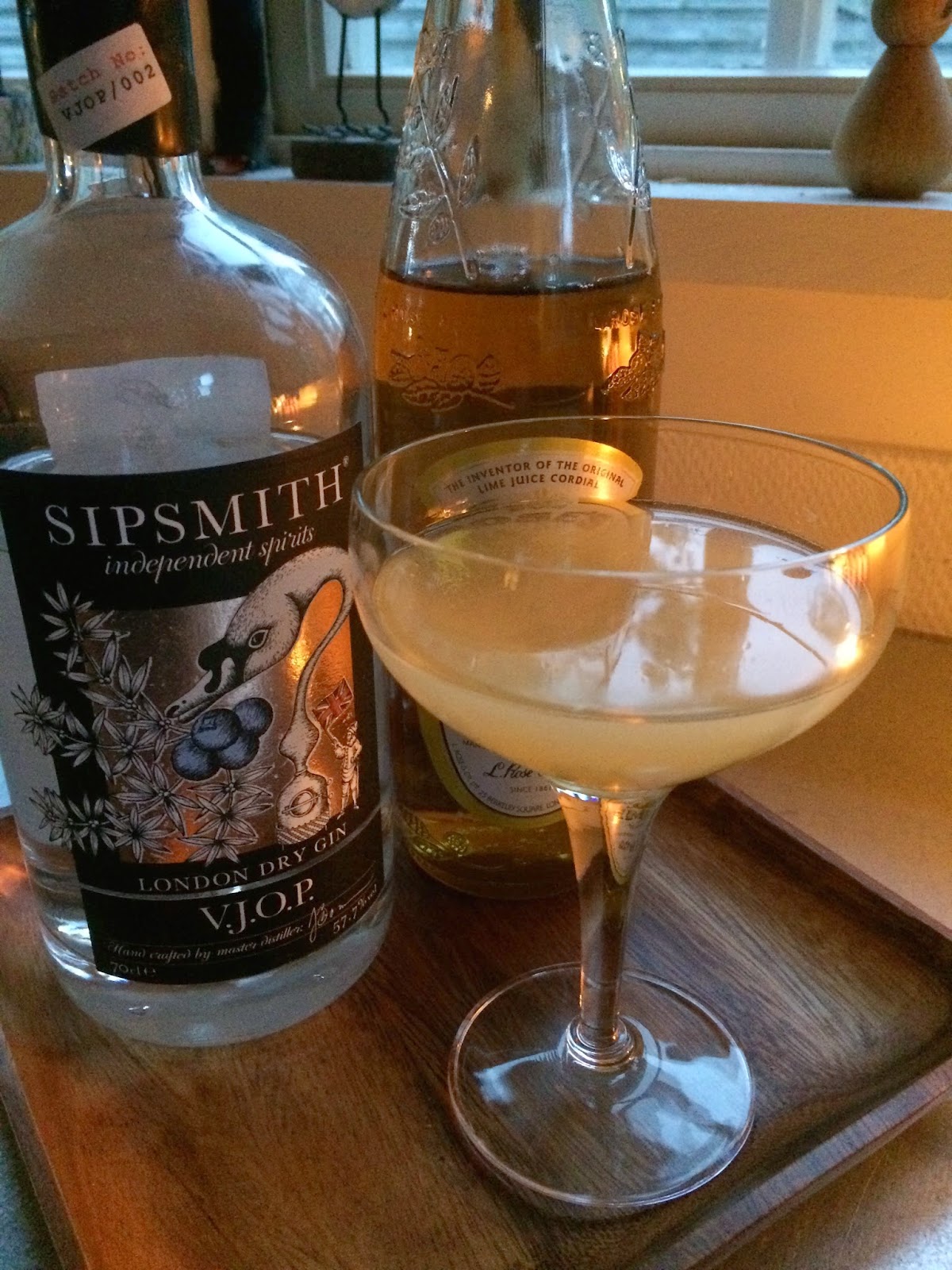 Chris of the ABarAbove blog is this month's MxMo taskmaster and he has set us a really hard task: He wants us to try something we have never tried before. Or to quote from his announcement post:

Basically the idea is to try something new, an ingredient or technique that you’ve never had experience with before and create a cocktail around it… Use a spirit that you’ve never used before. It could be a base spirit, modifier or that Belgian Ale that rings in at 15% alcohol. Use an ingredient that has always captured your imagination in the supermarket. Maybe that weird looking fruit that you always walk by at Whole Foods, or that unusual looking vegetable that you can’t even pronounce. [or] Use a new technique that you’ve never tried, but have always wanted to. Have you been dying to make your own vermouth, amaro, or martini glass made completely out of flavored sugar.

I have chosen Rose's Lime cordial - an ingredient I have never mixed with, and I can't really say I have been daydreaming about it either.

However the lime cordial is part of the history of the Gimlet and so I secured a bottle of the light green stuff.

And then I chose Raymond Chandler to be my guide and use the ratio he heralds in The Long Goodbye: We sat in a corner of the bar at Victor's and drank gimlets. "They don't know how to make them here," he said. "What they call a gimlet is just some lime or lemon juice and gin with a dash of sugar and bitters. A real gimlet is half gin and half Rose's Lime Juice and nothing else. It beats martinis hollow."

I believe many would suggest mixing with Plymouth Gin for the cocktails connection to the British Navy and the curative mix of lime and gin that kept the sailors from getting scurvy. I chose a Sipsmith VJOP in stead for the generous amount of both juniper and alcohol - thinking that might even be a more authentic gin taste from way back when the mix of lime and gin did not have a fancy name and was not written up in cocktail books.

But I'm not sure if it is the 1:1 ratio or the choice of gin that let's this particular drink down - it's just not a nice taste. The decidedly synthetic taste from the lime cordial catches on the strong juniper flavor of the gin and leaves you with a taste of cough syrup and unwashed underwear.

So I think it's safe to say - I've bought my first and my last bottle of Rose's Lime. 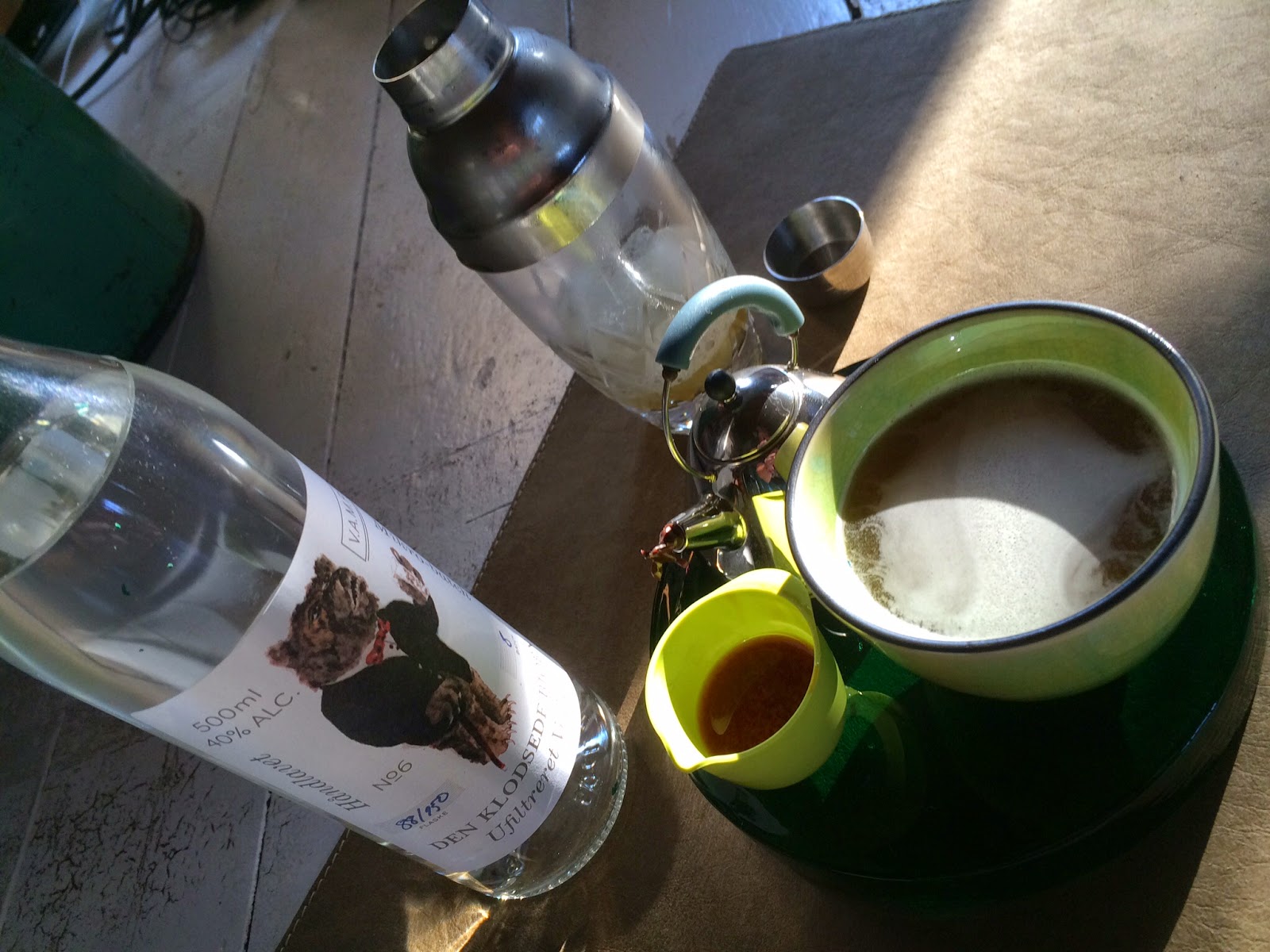 Sometimes the internet will take you places you didn't know you wanted to go to. Like to a page where a Green Tea Martini is mentioned, and then that idea gets stuck in your brain and won't leave.

That is what happened to me today, and fortunately I had - or thought I had - the right ingredients for the cocktail.

A while ago I picked up a bottle of small batch vodka in a newly opened store in Copenhagen. The guy running the store had distilled it and he has chosen the name The Clumsy Bear for his vodka.

I thought this would be a good cocktail to test the vodka on.

The original recipe calls for a traditional japanese syrup called Kuromitsu made from black sugar. I have no access to that, but I figured instead I would use barley malt syrup for a flavorful sweetener. Also it ties in with the barley malt used in the vodka.

And then I was absolutely sure I had some small packets of powdered green tea - and sure enough at the back of my cupboard I found a stack of packets. Since I have no recollection of ever making green tea from them, I do not know if the powder have become too old and changed color or just are of a different kind than the type Takumi Watanabe uses.

In any event my Green Tea Martini was more of a bog swamp color than the bright green color in the pictured with the original recipe.

Taste wise I like it a lot - it has a dry quality to it which is a bit surprising with 3 cl creme de cacao in it. So maybe I should look for some bright green green tea powder and add it to my repertoire.
I started by stirring the tea into the vodka and then added the other two ingredients, then filled my shaker with ice and gave it a good shake. Owing to the fact that the vodka bottle had a wax seal that had floated a few bits into the bottle I double strained the cocktail.