Lurking in the Deep Blue 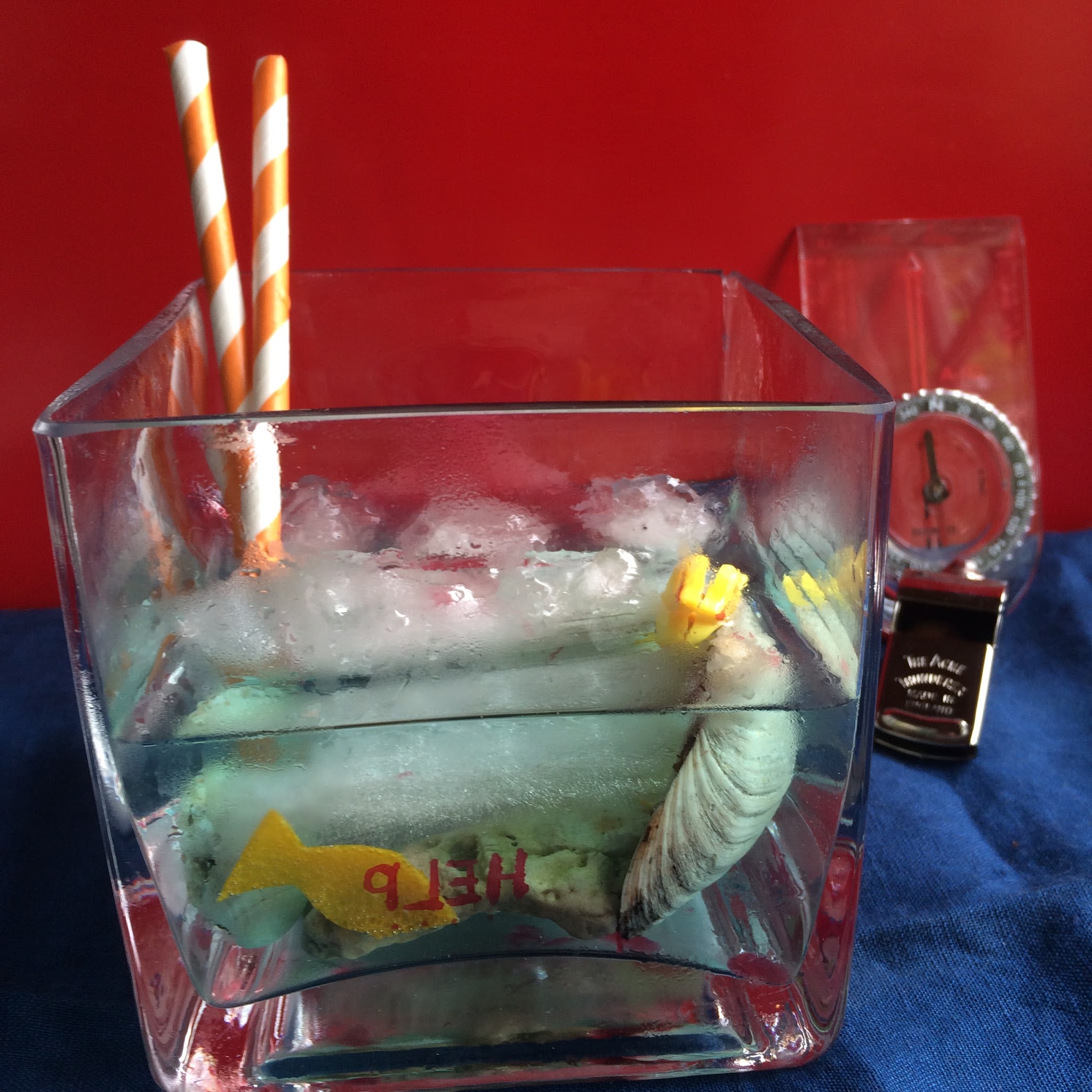 The theme for this month’s MxMo is Spooky Sips. While I tried to think of something scary it dawned on me, that there must be a huge cultural factor in what scares us.

Denmark became a Lutheran country with the stroke of a pen the day before Halloween in 1536.

From that day the church stopped observing saints days - and the king grabbed all property and land from the roman-catholic church.

I’m sure the reformation did not stop common people from putting out lamps cut not from pumpkins but gourds since they were plentiful to fend off evil spirits, but the tradition slowly faded and did not return until about 10-15 years ago.

So if spirits from the dead does not hunt us, what does? Being surrounded on all sides except for 68 kilometer land border with Germany by water anything lurking in the sea will get our blood pumping.

Not that we have many dangerous sea creatures in the cold waters of the northern Atlantic and the Baltic Sea. But the idea is scary.

Denmark send out the worlds first expedition with oceanographic tasks in 1761. And since then there have been several and several brilliant Lego Deep Sea Exploration Sets to inspire future oceanographers. (Yes I want a set)

The most famous expedition was the Galathea II expedition from 1950-1952. The scientists found life at the bottom of the Philippine Trench - at the time thought to be the deepest spot on earth.

So in response to the request from JFL of Rated R Cocktails for spooky sips, mine had to come from the bottom of the sea.

As an interesting Tiki aside - one of the regular sailors on the ship - Ole Reiman - brought home huge amounts of ethnographic and opened a bar called Galatheakroen in Copenhagen that has an amazing Tiki vibe but serves mainly beer and is famous for it’s Rijsttafel.

I don’t know if Reiman visited any tiki bars during Galathea’s circumnavigation - but according to the log the ships was in Honolulu for 3 days in March of 1952 and 10 days in April so it’s not impossible.

And now for the Lurking in the Deep Blue:
Stir the first four ingredients with ice, serve over ice in a highball glass with the tonic added at the end.

Or go crazy in a fish bowl with Titanic ice cubes, stones and sea shells (I boiled mine for 5 minutes), fish cut from orange peel and blood - I had some thick rhubarb shrub - grenadine would be good too. What ever scares you.
And now I am off to the beach - to quote John Masefield from his poem Sea Fever

I must go down to the seas again, for the call of the running tide
Is a wild call and a clear call that may not be denied;

I will leave you with a couple of nice videos

A 20 minute long film from the actual expedition - unfortunately this is in Danish only but around the 17 minute mark the net is brought up from the deep and life discovered.

A delightful portrait of the now 96 year old scientist who discovered life at the bottom of the Philippine Trench with English subtitles:


The Old Man and the Deep Sea from Natural History Museum Denmark on Vimeo. 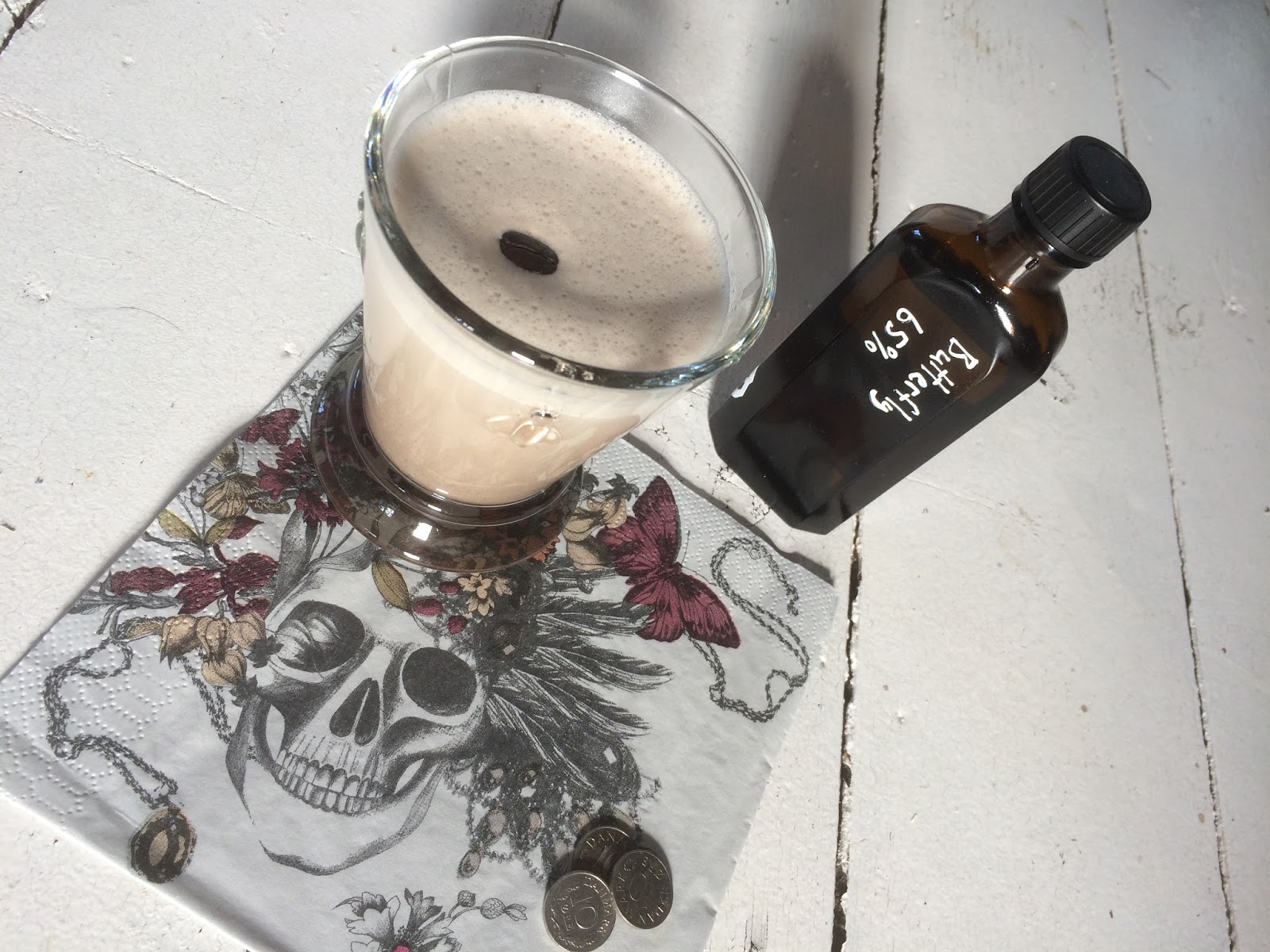 Coffee and bread, you ask? Is this not a cocktail blog? Indeed it is - and todays cocktail is inspired by a late 1800’s early 1900's hangover cure from a cafe in Copenhagen involving coffee and bread.

Café Bernina was a popular hangout for young intellectuals from about 1880 until the 1920’s. At it’s height it was owned and run by two Swiss brothers named Tönjachen but always called Cognacsen (well it's funny in Danish).

Bernina's specialty was a punch called the devils punch made from 17 different types of booze. After a night of drinking the devils punch with people like the Norwegian Knut Hamsun or the Swedish August Strindberg you needed help to get you going the next morning. Bernina had a cure.

Some guests had ham and eggs on rye bread others had brioche and java - bread and coffee - which has always been the way most Danes eat breakfast.

One of the young intellectuals was the Danish author Gustav Wied. He once wrote a short story called Spader Es (sorry in Danish) meaning Ace of Spades -  set at Bernina.

In this story a man orders an Absinthe au Lait as if every cafe in Copenhagen would know that particular drink. And then he goes on to explain that absinthe mixed with milk makes him very mellow and friendly whereas absinthe neat or mixed with water makes him bitter and antagonistic.

So I looked it up - all of google has only references to this particular short story - Absinthe au Lait does not exist in the real world.

So I decided to make it exist - and to work in the brioche and java too (Ham and eggs would have been a step too far, don't you think)

It turns out that the Dutch (not to be confused with the Danish although our languages are equally difficult to understand) have a tradition for drinking warm milk with an anis tablets or blocks dissolved in it.

And back when Bernina existed and the intellectuals had ham and eggs or brioche and java for breakfast in the less affluent parts of Copenhagen workers started their day with a Milk Toddy - warm - or cold - milk and a shot of aquavit. (One such establishment can be seen in the picture at the end of the post)

So it all comes full circle with Java & Brioche:
Start by steeping the brioche and java in the milk for at least a couple of hours in the fridge, then strain and strain and strain until all or most of the coffee and the bread is out of milk.

Pour the absinthe into the bottom of a glass capable of handling a bit of heat and then either steam the milk with an espresso milk frother or gently heat it in a sauce pan but do not bring it too close to boiling - it should only be hot.

Pour milk into absinthe and stir and then garnish with a coffee bean it your drink has a frothy head.

How does it taste you ask? Interesting is the polite word but it actually grew on me as I drank it and I could see it work for a late winter brunch with ham and eggs after a long walk on the beach.