Duck And Cover - a bar in Copenhagen 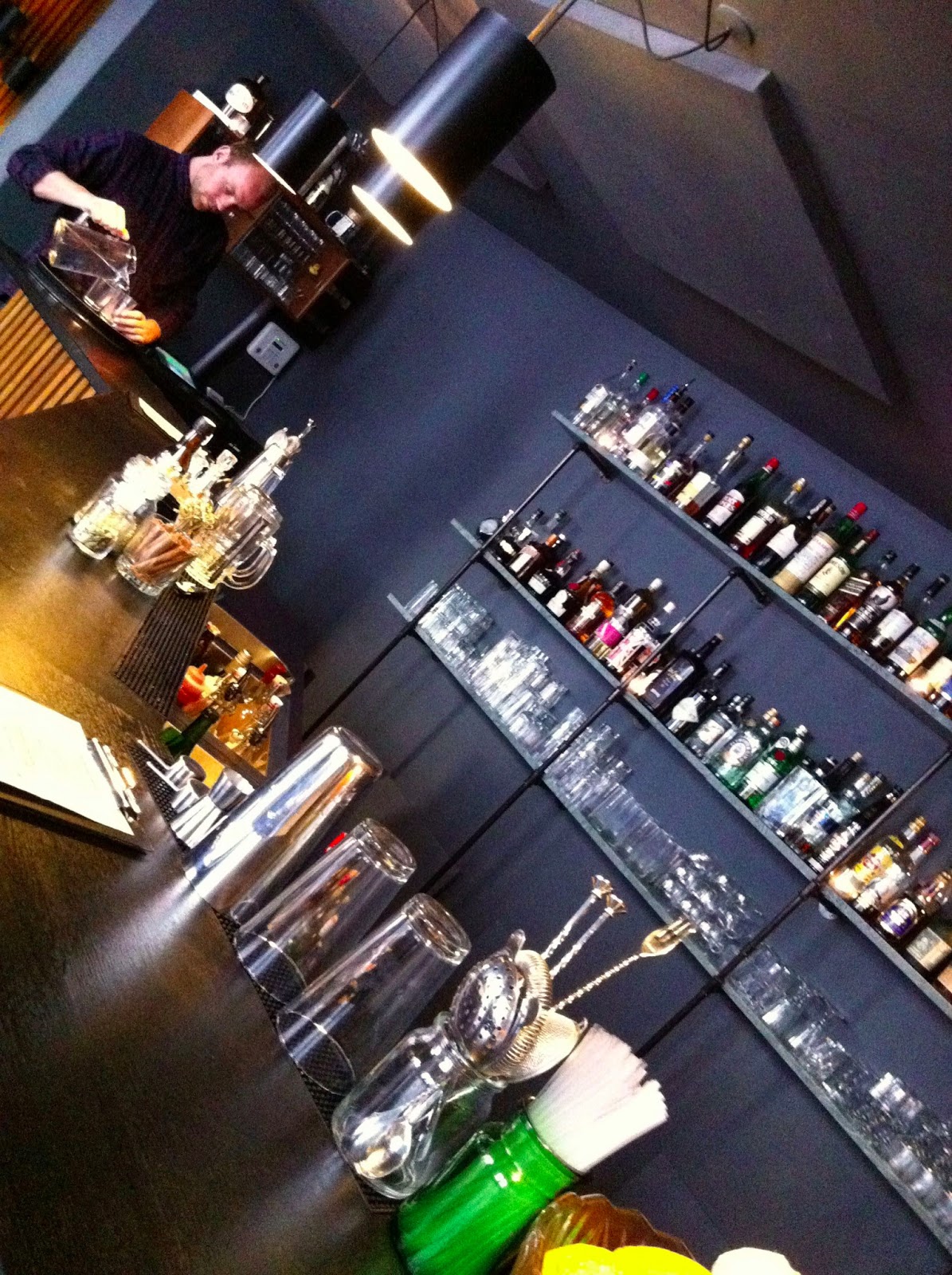 Brasilian rosewood, black leather, dark walls and carefully muted light. Kasper Riewe Henriksen formerly of Ruby and a competitor at the Diageo Reserve World Class 2012 Global Final has opened a new bar in Copenhagen that send me right back to my childhood.

I loved an iconic Danish Design Magazine and it's adds for a certain kind of bookcase invented by Poul Cadovius that always had a glass of whiskey in it and a general feel of gentlemans club about it.

We arrived four very thirsty women and were warmly welcomed by Kasper himself who served us water and introduced us to the drinks list.

He is a very efficient bartender so we had our drinks very fast after making a decision. We had ordered a couple of Floral Fizzes, an Ipanema and an Rock Islands.

The latter was for me, and was the very happy marriage of Talisker and Honningsyp - a special mix of aquavit and honey the originated on the island of Bornholm out in the Baltic.

It was a lovely mix - mild smoke from the Talisker and sweetness from the honey. It reminded me of Penicillin - one of my favorite cocktails.

My three friends also enjoyed their drinks, so much so that the next round was one Floral Fizz, and Ipanema, a Gentlemans Cup and a Last Word for me.

The Last Word was not on the drinks list - but now I know where I can get the best Last Word ever - it was more than perfect.

We visited Duck and Cover just after it opened on an afternoon of a public holiday. Not a busy time at all, but Kasper explained that it was fine with a slow start to get everything working and establishing routines.

I want to come back on a busy evening, and I know there will be many - the bar is in a perfect place in the neighborhood of Vesterbro, close to Lidkoeb a bar owned by the people who own Ruby and an up and coming cocktail spot in the city. 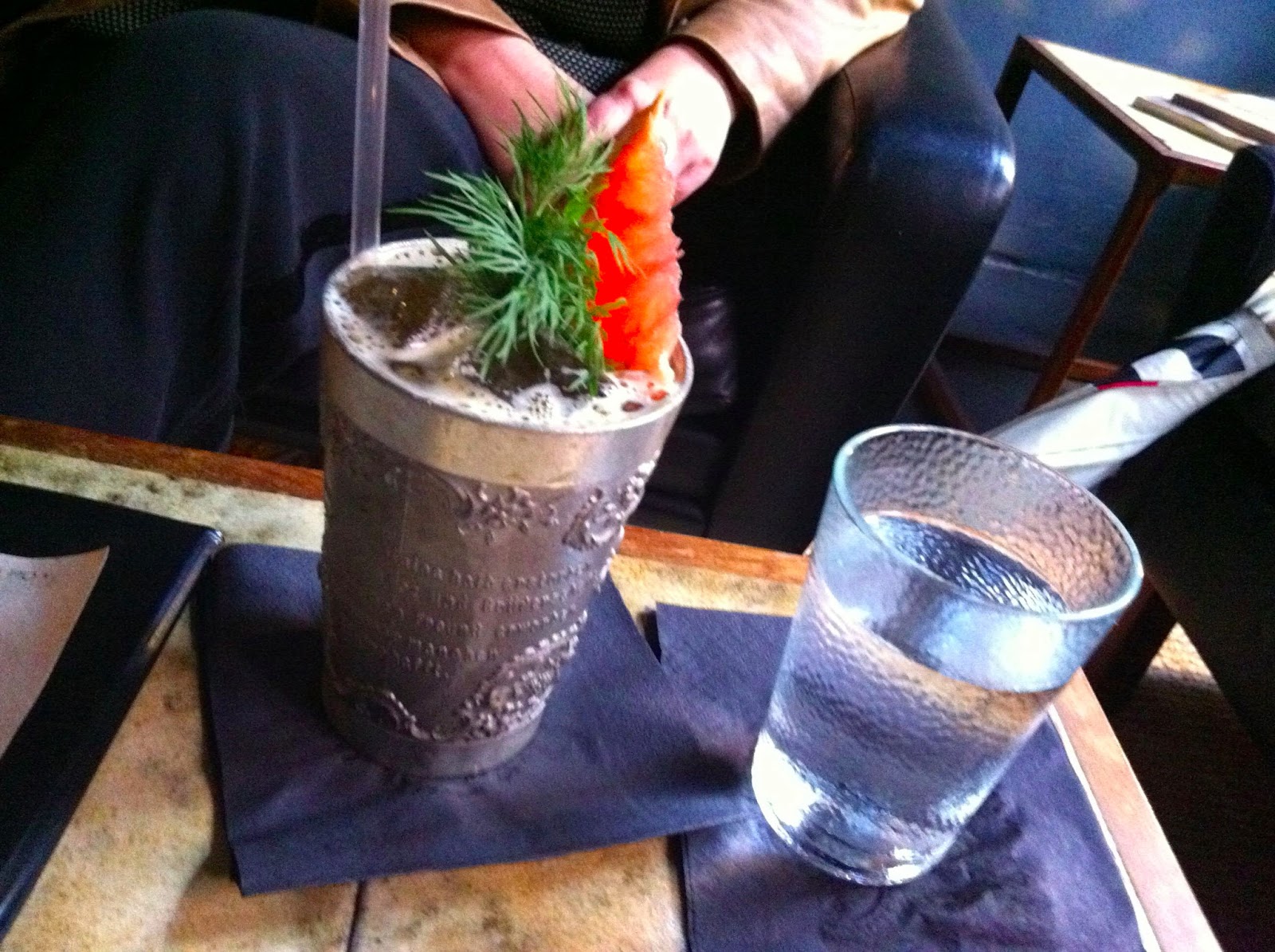 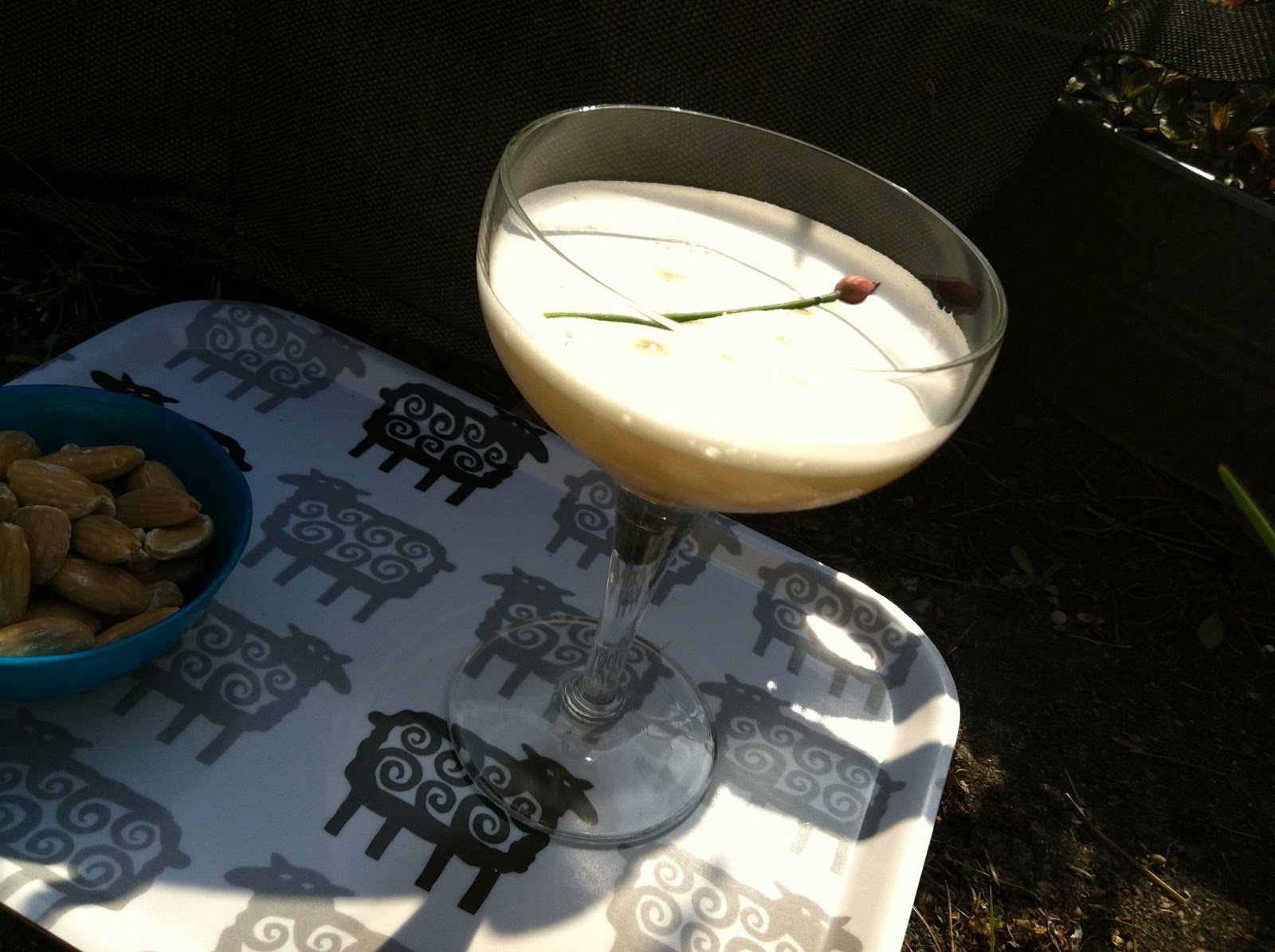 Mark - the gracious host of Cardiff Cocktails - really challenged me this month with his theme for Mixology Monday: Witches' Garden.

In his announcement post he asked us to raid our herb garden. I really wanted to, but a long harsh winter has left me with a herb garden that looks more like the suburbs of Tjernobyl than anything else.

On the other hand I've spend most of this week slowly savoring my way through Amy Stewart's amazing book The Drunken Botanist, and that meant I had to rise to the occasion - or rather my herb garden had to.

What had survived was some sage and some balsam herb. And nothing can kill rhubarb so I had that too.

The kind of balsam I have is the one that has a camphor-like smell and taste - another one taste and smells more like camomile.  I love things that taste like harsh medicine so that's fine by me.

It's a very interesting herb with a long history and diverse usage from tea to place making in Bibles.

I made a very simple syrup out of some rhubarb, sugar, star anise and a tiny bit of water and cooled that of. Meanwhile I had time for some homemade salted almonds - just cook the almonds for about 5 minutes in quite salted water - I used 2 teaspoons for 10 cl of water - and then dry them in the oven.

The Balmy Rhubarb has a mezcal base and is an egg white cocktail.
I started by basing the balsam herb up good with the rhubarb syrup and the lime juice. The I added the egg white and the mezcal and gave it a good dry shake. Finished of with adding ice to the shaker and then shaking again.

Strain into cocktail coupe (you could double strain but I kind of like tiny bits of herbs in my drinks) add bitter and garnish with a balsam herb leaf - or a pretty edible flower. I found a tiny colony of blooming chives growing on my patio.

Enjoy - and thanks for making be work and think Mark!