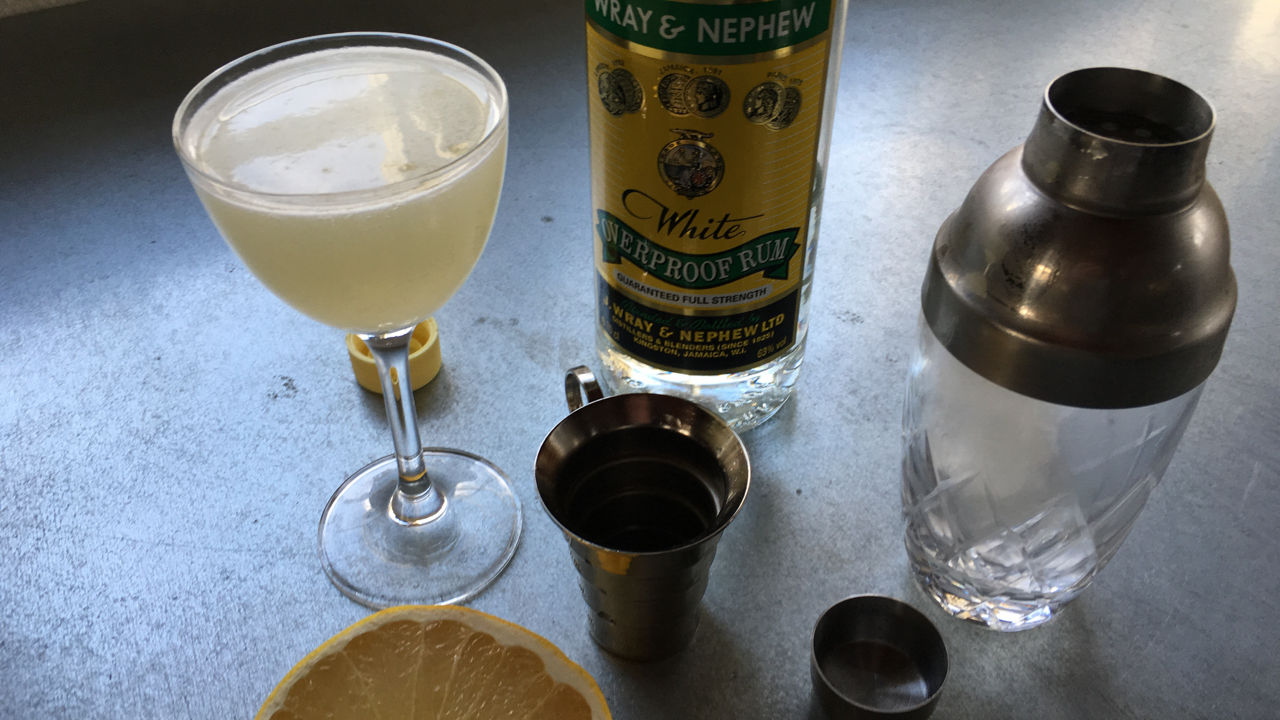 Until late last night I was not sure I would be able to come up with a cocktail for this month's Mixology Monday.

Dageb of the Nihil Utopia blog had set us the tough task of working with an overproof spirit.

My theme this time is overproof. Or rather how you utilize overproofs.  Do you sub them into your standards? Save them for accents in particular recipes? Pour them into ceramic volcanoes and set them on fire? Reserve them only for making liqueres? Whatever it be I'm looking for your recipes that use overproofs as base or as modifier in a noticeable wa

I have several overproof spirits - but to be honest I rarely use them and mostly just often hand samples to friends and coworker who want to know what they are all about.

Then somehow I ended up looking at at recipe for a banana and steak dish - Steak Stanley - that prompted some wheels in my sleep addled brain to fall into gear.

So I give you the Daiquiri Stanley:
Measure everything into a shaker, add ice and shake for about 20 seconds - strain into a coup or Nick and Nora glass.

Did I cook the steak? Yup - in Danish!

Update about the origins of Steak Stanley - March 21st

Let me readily admit: I love details. Once something catches my attention I can not let it go before I know all (yup, I’m also a horrible know-it-all) which is why cocktails and their history will always be of great interest to me as I can never know it all.

But since I myself came up with the Stanley Daiquiri - what detail could possibly be nibbling at the back of my mind?

The steak of course - I have cooked it twice now - and done quite a bit of personalization - I don’t have much wine and won’t open a bottle for just a sauce, but I have plenty of vermouth, even a modern German one Belsazar that I didn’t much like in my Negroni, but which makes an excellent sauce.

Strange as the combination of banana, horseradish and steak may seem at first glance it is excellent and very tasty.

So where did it come from, and who is Stanley - to be?

Well as Tom Fitzmorris writes he first encountered the dish at Brennan’s and then traced it to dinning cars on the american railroad.

Which got me thinking, could Stanley be Henry Morton Stanley the Welsh’s explorer who found Livingstone and saved Ermin Pasha (and annexed Congo for the Belgian King Leopold II - not the country the king - with unheard of brutality)? Stanley who for some is a hero and others a brute.

Stanley found Livingstone on assignment for the New York Herald and his accounts was printed far and wide.

After he found Ermin Pasha he went on a lecture tour of the USA in 1890-91 - by rail I suspect - the black Pullmann Chef and cookbook author Rufus Estes  counts taking care of Stanley as one of his most memorable jobs. However in his Good Things to Eat there is no mention of any dish named in Stanleys honor.

There is a commemorative programme of Stanley’s tour online that took him to New Orleans on March 29th 1891 - unfortunately with no mention of food but with adds for Angostura Bitter and Lois Roederer Champagne - that warmed my cocktail heart.

But then my Henry Stanley Morton train of thought was derailed, by the existence of a cookbook published in 1859 called The Moderne Cook written by Charles Elmé Francatelli.

That really threw a spanner in my research machine.

A glimmer of hope was a small New Orleans connection - the cookbook was published in that wonderful city by Thomas L. White, Canal Street 108 at a price of 3 dollars. (Seems a lot but he was a student of Careme and had cooked for Queen Victoria)

Henry Morton Stanley was no where near Africa in 1859.

But this is why I will always love details: He was near New Orleans.

In the spring of 1859 he arrived in the city as a cabin boy on a ship from Liverpool. He was 18 years old and still went by his given name John Rowlands.

But in New Orleans he met Henry Hope Stanley who by some accounts was close to the first person in John Rowlands life until then who was ever nice to him.

Rowland asked for a job from Stanley who had a store in New Orleans and from that meeting Henry Morton Stanley the man and explorer emerged as the abused and neglected boy found freedom from looking at the mighty Mississippi River, in the city of New Orleans and in simple human decency.

Powerful stuff - but what about that steak with bananas and horseradish?

Hmmmm, well - hmmm-ing som more, I have found something, a menu for a restaurant in New York in 1914 - Henry J. Wollenhaupt of 37 East 19th Street.

Right there is a description of steak with banana and horseradish: Filet mignon saute a la Stanley.

Henry Stanley Morton died in 1904 in London - could he still be the Stanley?

I still don’t know, but I will keep looking, promise….

I have been looking some more - I still can't find a source for steak with bananas and horseradish older than 1914, but I see that according to the book Breakfast At Brennan’s And Dinner, Too the dish was supposedly created in honor of Stanley Kowalski from A Streetcar Named Desire when the play was turned into a film and the film crew was living in the French Quarter.

The film premier was in 1952 so that can't be the truth either. I do however think Lolis Eric Elie is on to something in this article about the fine line between tradition and staleness. Perhaps the dish was reworked and rediscovered by Brennan's in honor of the film.

And if the dish is still on the menu this summer when I attend Tales of the Cocktail I will try it - maybe I can convince them to mix my Stanley Daiquiri. (Although now it seems to be honoring a fictional character who is both a wife beater and a rapist. Not sure how I feel about that.)

Email ThisBlogThis!Share to TwitterShare to FacebookShare to Pinterest
Etiketter: banana rum, MxMo, My own mix, wray and nephew overproof rum