Seven things I took away from TOTC 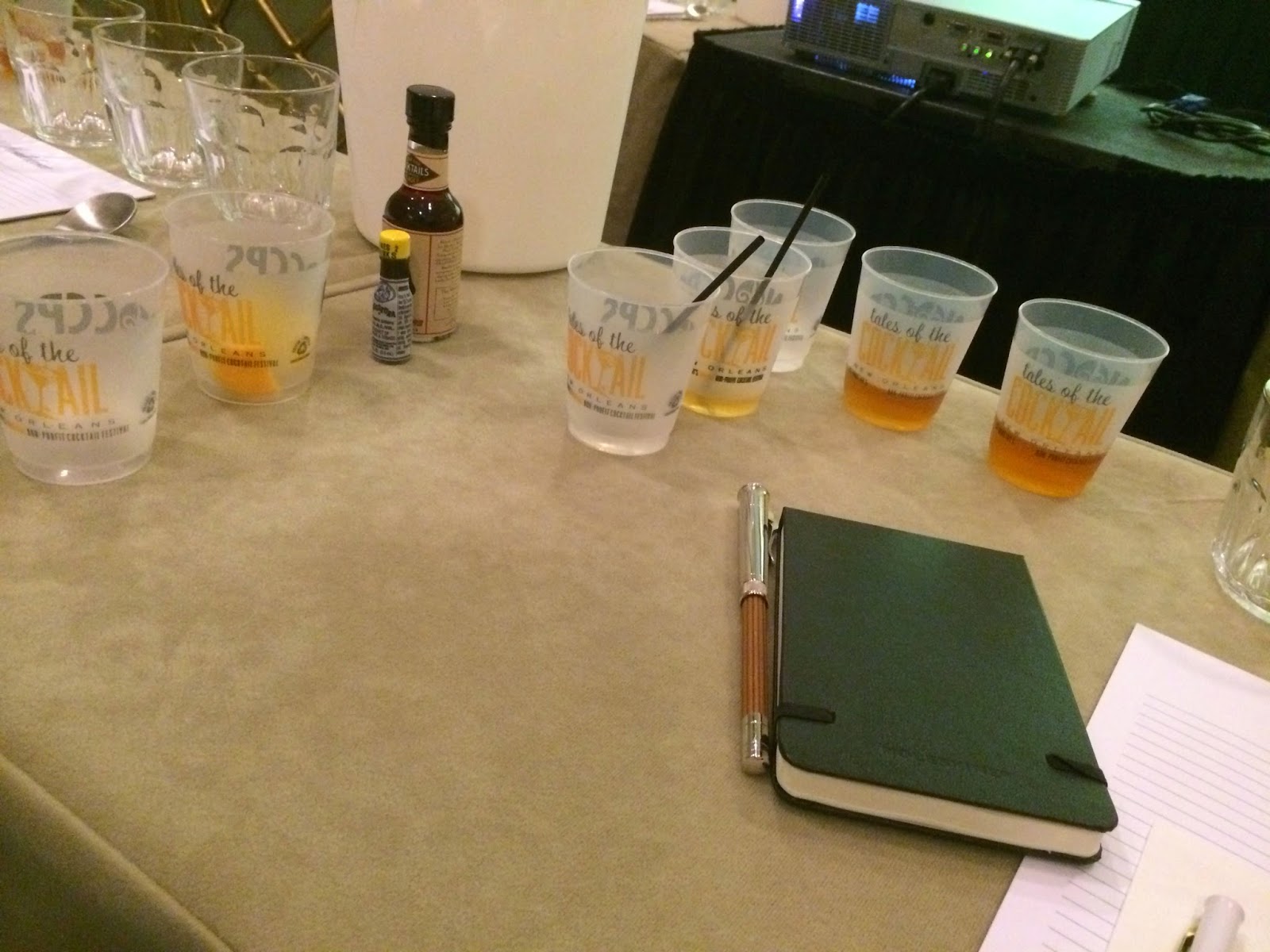 I notice that the trend in describing your adventures at Tales of The Cocktail this year is making lists.

I will list the seven most heavily underscored notes from my notebook in the order I made them:

The very first seminar I attended was the one I had looked the most forward to: The Floridita: Cradle of the Daiquiri presented by Jeff Berry and David Wondrich. They did not disappoint me.

In Copenhagen some years ago I had attended a seminar by Jörg Meyer about the cantineros of Cuba and the strong union they formed early on demanding 8 hour working days and publishing recipe books. Since then the Cuban bar scene during prohibition has been a subject I've been very interested in.

Delving into the life of one bar and especially it's famous customer Ernest Hemingway and it's - at least for TOTC attendees  - equally famous owner Constantino Ribalaigua Vert was just the thing.

Floridita, Hemingway and Vert can be summed up together in just one word: The Daiquiri. And that's what Berry and Wondrich did. And it was during this part of the presentation I put three solid lines under the words hand squeezed lime.

Jeff Berry explained how Victor Bergeron spent time watching Vert work before opening his Trader Vic bar and carefully noting measures and such. But in spite of this he could not get his Daiquiris to taste as good as the ones Vert mixed until he finally realized something: Vert did not use a Mexican elbow to squeeze the limes for his Daiquiris - he used his hands and that meant more of the essential oils from the fruits ended up in his drinks instead of in the squeezer.

I love this detail and plan to improve my Daiquiris accordingly.

Two dapper gents in evening wear at 1 o'clock on a Thursday, where but at TOTC would you meet seminar presenters like that.

Philip Greene and Simon Ford made a grand entry to the 007 theme and showed us a picture of the flying car Chitty Chitty Bang Bang. Some of us feared we had gone to the wrong seminar but Bottled in Bond was a tour through both the life of 007 and Ian Fleming and therefor the flying car made sense.

I did not expect anything overly exciting served during this seminar as 007's taste in drinks is pretty bad - except for his taste in Champagne of course - but I did walk away with a new name: A shaken martini is called a Bradford.

**What to take to a desert island**

Derek Brown, J.P. Featherstone and Wayne Curtis gave us a nice introduction to how booze made it’s way across the US and indeed the world in the seminar Jug of Empire.

One of the crucial questions asked and answered was what would you bring to an isolated island? Many types of survival kit was suggested, but a bottle of rum might just be the thing that will not only save you but make for smooth sailing in more than one way.

I also got my first taste of Apple Jack at the seminar but not my last.

My favourite seminal at TOTC 2013 was by the Drunken Botanist Amy Stewart and Susan Morrison on growing you own booze.

This year Jared Brown and Anistatia Miller picked up the theme in Garden, Field & Forrest to Bottle and Glass.

Anyone who follows the two on their blog or Twitter knows they grow their own, and Anistatia Miller even declared it’s the last luxury left: To grow you own.

They had many good tips for using what you can pick for your cocktail, but the one I underlined was the one about osmotic Balance:

Clever trick that can also be used in reverse to make sour fruit sweet.

In June I received with much anticipation Robert Simonsons book The Old-Fashioned and pretty much read it in one session. His seminar on the iconic cocktail was a given from the moment I saw the list of this years subjects.

It was an amazing interactive seminal where we got to mix our own cocktails - tasting gin, rum and whisky Old-Fashioneds side by side.

Mr. Simonson is a great - dry - presenter and I learned a lot. Not least that just around the corner from my hotel I could walk into SoBu Restaurant and order a spoon cocktail - one of the many modern takes on the oldest of all cocktails.

If Simon Ford and Philip Greene were dapper in the white and black evening jackets the tree gentlemen from The Savoy in London was just dapper period. Never have I seen that much perfect mens wear in New Orleans in such a small room.

The took us through 125 years of excellent service and wonderful bar lore.

My final underscoring was under the lovely tale of the Tom and Jerry cocktail.

Notoriously hard to make as it involves hot liquid and egg the segue to the anecdote was a Tales tasting cup of scrambled eggs.

A guest ordered the Tom Jerry from a junior bartender at the American Bar in the Savoy hotel many years ago. In stead of hanging on the young bartenders shoulder and reminding him to tale care the head bartender let him finish the drink and serve it, and then went by the guest for a look at the finished product.

The guest was struggling with a cup of scrambled eggs, the head bartender gently offered him an spoon and suggested, using it for the complimentary scrambled eggs while he waited for his cocktail.

I loved that story and all the other interesting facts about one of the worlds most famous bars.
Indsendt af Andrea kl. 10:34 AM

Email ThisBlogThis!Share to TwitterShare to FacebookShare to Pinterest
Etiketter: TOTC