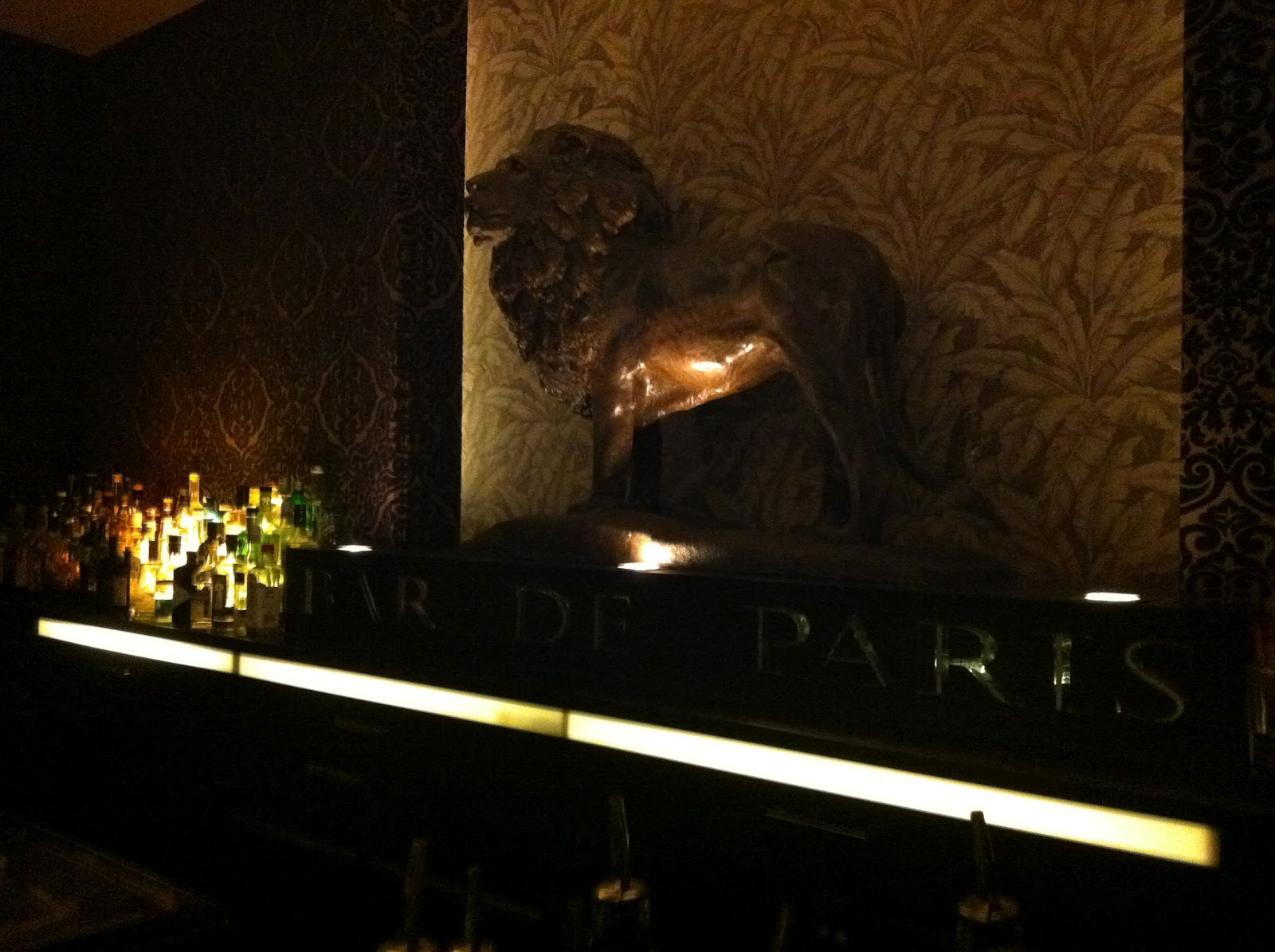 What do I expect from the perfect bar? Obviously great cocktails but also a pleasing room, comfortable furniture, competent and friendly people and good companionship.

I found all that Monday night in Le Lion Bar de Paris in Hamburg.

Jeffrey Morgenthaler had alerted me to it's existence - I have visited Hamburg several times and never knew a small slice of Paris could be found in Rathausstrasse just off the central square.

I had tried to email the bar for a reservation, my friend an I were afraid there would not be room for us, but when I got no reply our plan was to be there at 7 p.m. when the bar opened.

A couple was waiting at the door when we arrived and we all perked up when the clock on the town hall stroked 7 and the bartender strode across the street from Cafe Paris with a bundle of baguettes under his arms and a friendly smile on his face and welcomed us all inside.

The only thing you notice as you walk in is a huge lion casually posed behind the bar - everything else is in shadow because of the low lights and not until your eyes adjust do you notice the amazing wall paper - good enough to stroke - and the muted brown and maroon colors.

The couple who had been waiting with us headed for the bar, but we set our sights on a sofa corner until we came to our senses and approached to bar for first row seats to the amazing skill of bartender Mario Kappes.

That was out first good decision of the evening.

The cocktail menu immediately got us talking about what to choose as we saw so many things we liked or would like to try - we started out with a Twentieth Century.

Watching Mario mixing the cocktail was a treat - every part of the process was well thought out and completely structured and my admiration only grew as the evening progressed and more people arrived - not that the bar was ever crowded - but he did have to handle up to six different cocktails at the same time.

A job he handled with casual elegance and amazing speed.

Our first cocktail was exactly right - and completely differently from the ones I've mixed myself because of the use of a quinquina instead of Lillet Blanc.

We even got a taste of the amazing golden liquid - and I will now spend the rest of my life looking for a place to buy a bottle of my own Kina L'Avion D'Or ;)

Out next good decision was letting Mario choose out next cocktail. He suggested a Pendennis Cocktail - neither of us had ever heard of it.

He also told us the funny story about how the drink had been invented at the Pendennis Gentlemans Club in Kentucky, where Old Fashioneds were otherwise the order of the day, because ladies were visiting.

We loved it - it's something I would never have tried because of the Peach Brandy if I had just read about it. Until Monday I would have assumed that Peach Brandy would taste of bad synthetic peach. It does not. It has a wonderful almond like flavor that works with the gin, lime and Peychauds bitters.

At this point my friend and I parted cocktail ways - I ordered an Old Cuban off the drinks menu - and she asked if Mario would mix her an Aviation.

Now the bar was about as hopping as it would be during our visit and Mr. Kappes worked with another order mixed in with ours.

I noticed that he measured gin, Maraschino and lemon juice into a stirring glass but no Creme de Violette. And remembered that some mix it without, I feared she was looking at a huge disappointment.

But Mario did not let us down, he just added the Creme de Violette after he had strained the cocktail into a glass. That resulted in an amazing looking and tasting Aviation where the deep purple came rolling up from the bottom of the glass. Lovely.

At this point we would probably have had to vacate our lovely spots at the bar, if Le Lion bar did not offer canapés.

An order of 12 canapés was our third smart decision that evening.

Those lovely little rounds of baguette with cold cuts and cheese gave us our second wind.

Since I had already started on champagne cocktails I ordered a French 75 and Mario suggested a Cucumber Collins to my friend because we had discussed muddling techniques in Mojitos. She looked very pleased with her selection as I was. Her cocktail was a luminous light green from the cucumber juice and smelled like newly mowed grass on a summers evening.

At this point we had interviewed Mario about his shaking technique and how he sees himself as a bartender and how bar guests are different i Copenhagen and in Hamburg.

Mario sees himself as a craftsman and not as a mixologist, and consider people skills as an important bar tending skill.

Which he needed on the day when he had caught a guy sitting in his car outside the bar with his nose in The Savoy Cocktail Book as Mario collected his baguettes across the street.

When the guy from the car entered Le Lion and ordered an Opal cocktail and Mario asked where he had had it before because he didn't know it the guy exclaimed: But it is in the Savoy Cocktail Book!

- Oh, so it was you outside in your car reading the book, Mario countered. And that saved the evening for both bartender and customer and they even laughed about it later.

I decided to end my evening with a Last Word - still my favorite - and my friend went for her favorite a Sazerac.

But then Mario offered us champagne and a round of the wonderful salami we had on the baguette and we learned that the people next to us both worked in Denmark and spoke really good Danish and knew the Danish bar and restaurant scene so we recommended places like Gilt that does New Nordic cocktails and Moltkes Bar Speakeasy -  a hidden gem in Copenhagen. It was still too early to leave.

When we eventually did it was after a perfect final where Mario mixed a Ramos Gin Fizz in a completely different way to the one we have seen before and the way I have tried to.

He did not start with a dry shake but with a wet and then strained the cocktail for a final shake. Otherwise the ice will knock the foam that you have build down, he explained and yes at Le Lion they have tried shaking it for the mythical 12 minutes - it makes the drink undrinkable - the cream turns to butter and the ice melts and dilutes.

Even adding the seltzers was done with a flourish - he stirred a little hole in the cream/egg white foam to pour it into and the drink rose like a high pressure cloud out of the glass.

It was the most perfect drink I have ever seen.

And the Opal? It's gin, orange juice, Cointreau and orange blossom water.

I've looked it up, in my Savoy Cocktail Book that i didn't bring to Hamburg.

No need for it in a perfect bar like Le Lion. 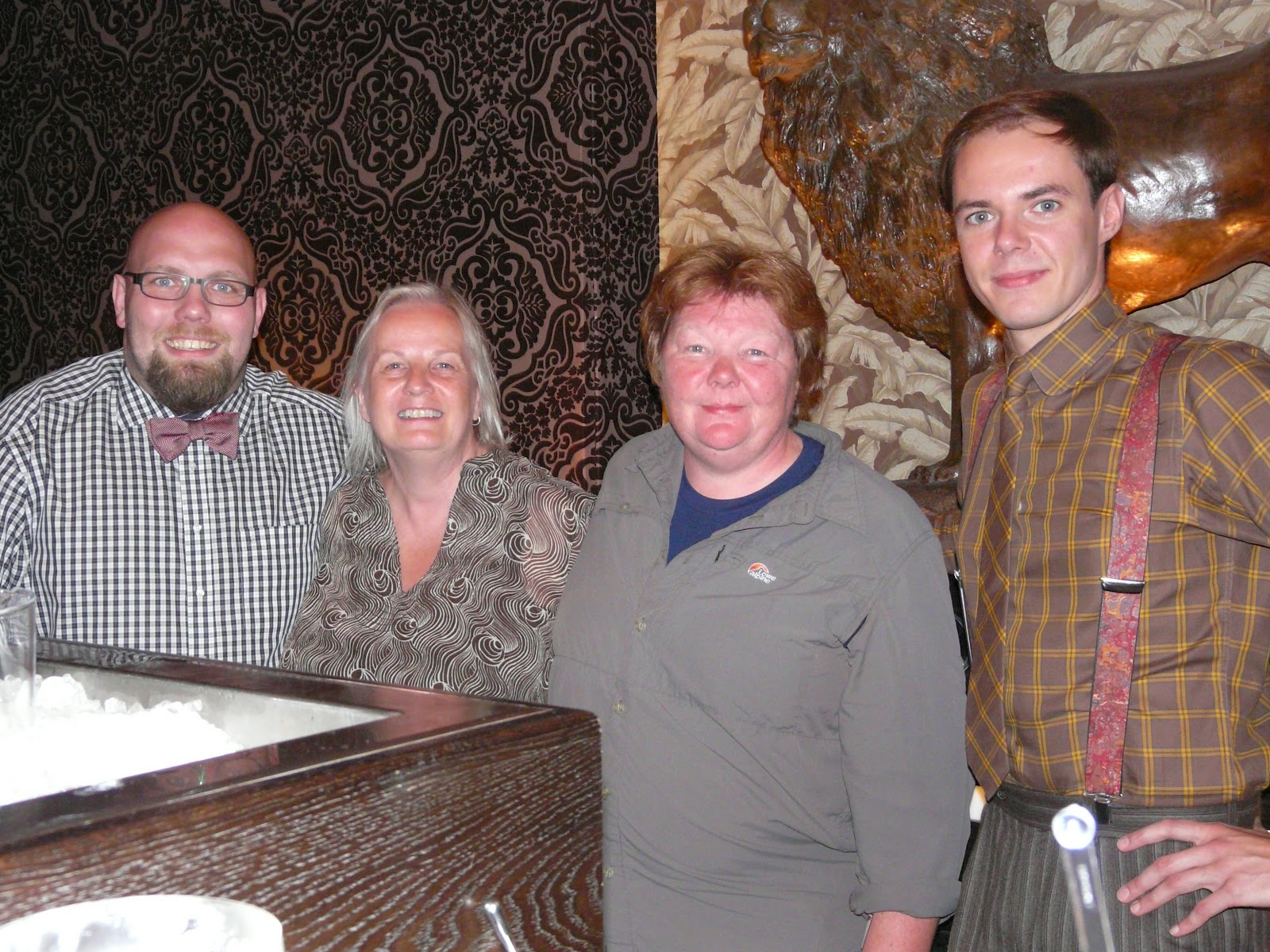