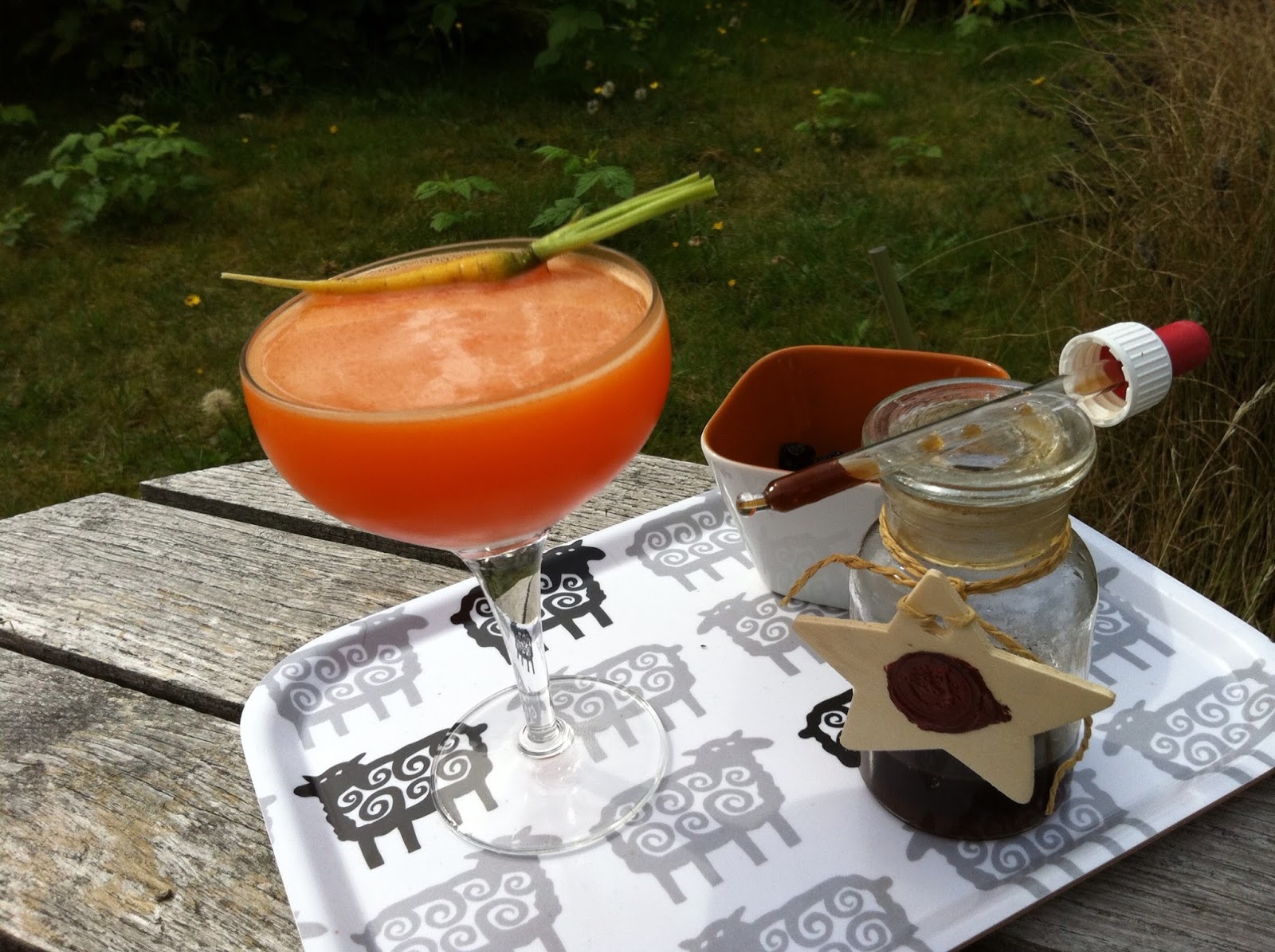 The name of my entry for MxMo LXXVI is only really fun if you understand Danish: Rod is Danish for root and this cocktail contains juice of not just one root but two - one of them hot enough to be called the chili of the North and supposedly burn the stomach lining of a cow or horse unfortunate enough to eat it.

This months theme for Mixology Monday is Fire. Kate of Muse of Doom - the gracious host - puts it like this in her announcement post:

You don't have to go full Blue Blazer, not nearly -- heck, you could go full Fireball Whiskey! (or Fire Rock Pale Ale, etc..) You could riff on the Old Flame or come up with an inventive name of your own. You could even use a good firewater or burned wine. (and if you're grilling fruit, save some for me, will ya?)

In essence, bring the heat! Bring the Fire! Bring your inspiration!

On a serious note: remember that lass in Britain who lost her stomach because the mixologists weren't in control of the dangerous elements they were using in a cocktail? Let's have none of that here, huh? There's a lot more to Fire than just the electrochemical reactions happening on the end of a lit match. Stay safe and trust your gut about what you're comfortable doing. We're all here to have fun.

I immediately knew I wanted to work with Armoracia rusticana commonly known as horseradish. It's about the only edible plant grown in Denmark that has any kind of heat - other than stinging needles, but been there, done that.

The next obvious ingredient was aquavit - a name not often used in Denmark - most people call it snaps or brændevin. The latter literally means burned wine, because the first commercially produced spirit in Denmark was made by distilling wine. Pharmacists and munks had the market with this expensive medicin believed to cure anything from pox to the plague from the 1200s.  If it didn't at least you died happy - if you could afford it because obviously it was expensive.

Not until the 1600s when someone figured out snaps could be distilled from fermented wheat instead of expensive imported wine did aquavit gain popularity as a beverage and not as medicine.

Since I was already looking a local ingredients I decided to use carrot juice as a mixer hence the second root.

And when a friend gave me an amazing bottle of a tincture of Apothecary's Rose it all came together:

Shake with plenty of ice and double strain into cocktail coup. Garnish with tiny carrot.

It turned out really well - the horseradish does not overpower the other ingredients, but it adds a bit of bite along with the aquavit to balance out the sweetness form the carrot juice. The rose tincture brought it all together.

* Bring equal amounts of fresh grated horseradish, sugar and water to a boil. Let steep for 15-20 minutes and then strain.

** My friend Dana, who made the rose tincture, kindly supplies this recipe:
Stuff a small jam jar full of petals + stamens of rosa officinalis. It must be officinalis, because rugosa imparts the scent but not the flavour, whreas the other gallicas impart the flavour but not the scent ... get the picture? Officinalis.

Cover with vodka and let steep three days. Strain, wring all the moisture out of the petals - and repeat three times more. Four glassfuls of petals + stamens to the same jarful of vodka!

Strain, stopper airtight, and let sit for three months at least to mature before using.

This yields a very concentrated 'image of a rose'. We are talking drops, not dashes. May be diluted 3 - 4 times and will still give you an intense scent and flavour of midsummer roses.

Email ThisBlogThis!Share to TwitterShare to FacebookShare to Pinterest
Etiketter: Mixology Monday, My own mix, snaps