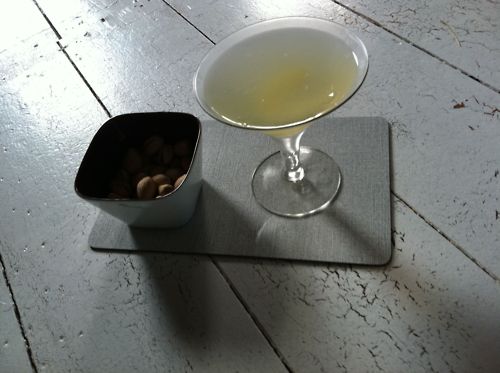 The taste of Art Deco in a cocktail glass, that is how cocktail archaeologist Ted Haigh describes the 20th Century Cocktail.

It's named after the iconic train between New York and Chicago called the 20th Century Limited. In 1938 the trains on that line was streamlined into absolute glory.

Also it was for this train service that the Pullman company invented the red carpet treatment of the passengers.

The train plays a minor part in Alfred Hitchcocks North by Northwest - where the style of the train, of Cary Grant and of Eva Marie Saint comes together. Also you would notice how small martinis were back in the real Mad Men days - it's worth renting.

And then mix this:
Shake everything with ice, strain into martini glass and garnish with a lemon twist.
Indsendt af Andrea kl. 4:32 PM